We went to Calgary on a Good Friday without any plans. We just packed our stuff and drove up to the city. No plans but one thing is for sure, we will hit Chinook Center and The Core for I am in search for work shirts. I need long johns in the pharmacy because my workplace can get really cold sometimes and I cannot focus on my tasks when my hands are frozen. They get stiff and numb.

I did not find any good deals for long johns in Chinook Center. Gerlie bought a pull over from Free People for her upcoming whale watching in Vancouver Island with the boyfriend and then we decided to hit The Core and get fancy. We had our lunch at Falafel King along Stephen’s Avenue and then back to The Core. The portions in Falafel King is huge. I felt like jogging in the restaurant after the meal.

So, I had purchased 2 pairs of jeans and cardigans. We tried on some Christian Louboutin shoes, Lanvin and Prada flats in Holt. I liked the Prada flats. They’re comfortable and fashionable but I’m holding myself not to buy them. It was very frustrating when you see an item that looks perfect on you but you can’t have them because they’re too pricey. We need more overtime hours in the pharmacy to have them. (lol) The thing is, we are not supposed to be buying anything fancy. We are there to buy our necessities. It depends on how you describe or give the meaning to necessity. That day, necessity for me is an item that you feel like you don’t have it even if you do…haha. I felt like I don’t have any nice jeans at all that’s why I bought some. Here’s the thing, I really don’t have a black and white cardigan and that makes me feel better (to not feel guilty). Still I did not find any long johns on sale. There are nice ones but they’re expensive and I don’t want to spend too much on work clothes. Why? Because they’re not seen anyway. I still have to put on my white pharmacist coat on top of my shirt. There should be something out there which has a good quality, comfy and reasonably priced.

It’s 4 o’clock in the afternoon and we have to rest for a bit. We drove to Holiday Inn in Macleod Trail South. As usual, the receptionists are very welcoming. We rested for an hour, had a power nap and prepared ourselves again for dinner.

We went to Thomsons Restaurant in Stephen’s Avenue. Neil and I have been there many times and we just keep on coming back. We liked the aura of the place, the food and the people. I wanted Gerlie to experience Thomsons as well. To cut it short, we had an awesome time in the restaurant. After dinner, we decided to go to Elbow River Casino and gamble. We had a great time! We won and we lost. Well, it’s not too bad at all though. We had set our limits so it’s not much of a loss. Yes, we lost but the experience we gained was precious. We enjoyed the Motown music in the casino. We had lots of laughs and excitement. Neil told us a news about a girl sitting on the corner while waiting for her boyfriend  just won $17,000.00. What a lucky lass! She got bored, inserted her money in the VLT machine, pressed a button and suddenly the alarm of a jackpot filled the place. I wished I got lucky that night too. C’est la vie.

It was Black Saturday, woke up and had breakfast in McDonalds. We went to Cross Iron Mills and again to search for the long johns. Finally, I found them in Tommy Hilfiger. They were 50% off the regular price. I was so delighted! I grabbed 4 different colors and design, tried them on and bought them. Gerlie had a nice cardigan and Neil had a pair of jeans and a knitted gray sweater too. After the purchases, we still browsed some of the stalls and had more shopping bags in the end.

Below are some of our photos in the wonderful world of retail.

Camwhoring while waiting for Neil trying on Some Fred Perry shirts and jumpers. 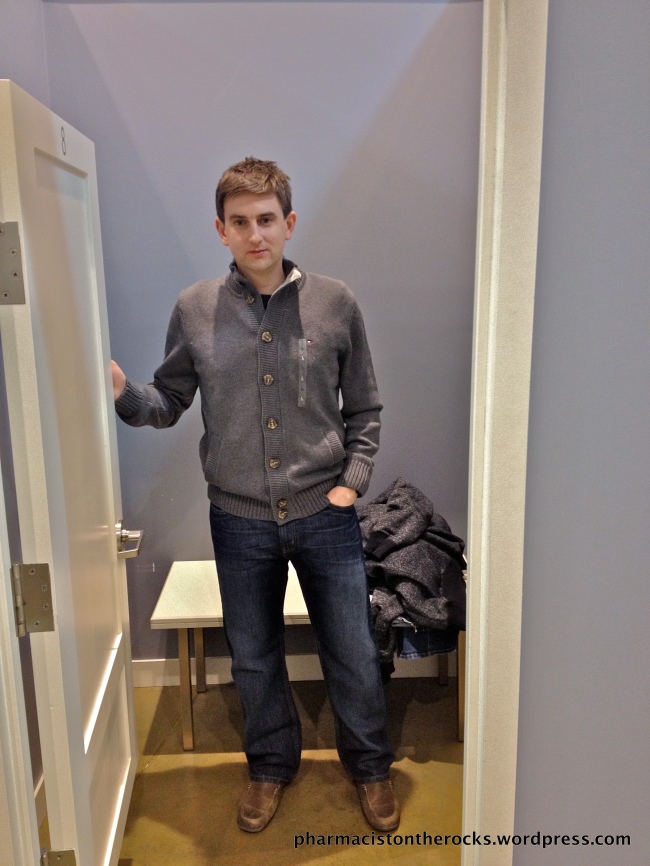 After shopping, we went to 17 Ave to have dinner in our all time favourite Filipino Restaurant, Pacific Hut. We ordered 4 heart attack dishes, crispy pata, pork sauteed in shrimp paste, beef in sour soup and “pinakbet” . After the gluttonic dinner, we went back to Chinook Center to buy Gerlie’s fancy Red Espadrille in Browns then back to Lethbridge.

That’s how we started our Easter Long Weekend. We had a fun adventure searching for long johns. How did you spend yours?